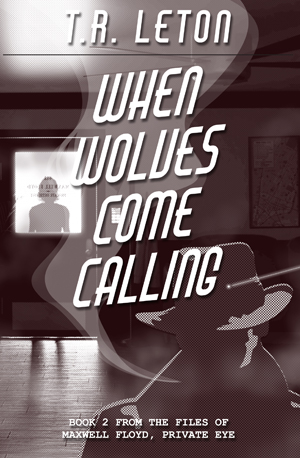 The little girl stared back at me with an expression of horror. Her long hair, dark and dripping wet, clung to her head like oily black cellophane. Her pale white skin radiated the sickly bluish chill of death. She stood, trembling, water rushing down her body to mingle with the foul black fluids seeping out of the mound of corpses at her feet.

She examined me curiously for a long moment before her gaze transformed into a glare filled with nothing but savage accusation. She reached out her hand, dripping water in the ghostly green light. A tiny index finger shot forward, pointing at me, and my gut wrenched with nausea that swiftly curdled into sheer fright.

Desperate, I wanted to look away but couldn’t. A body on the floor beside her twitched. I tried to look at it—at anything—to escape the girl’s dark stare.

It took everything I had to finally pry my eyes away from the girl to look at my hands. They shook uncontrollably. Wetness slicked my skin and dampened my clothes. A cold, clammy sensation weighed me down, making it almost impossible to breathe.

I looked back at the girl, unable to endure the horrid silence anymore. “What do you want?” I asked, my voice muffled in the thick, dank air.

The girl tilted her head, like a dog hearing a strange noise, but said nothing. Instead, the sound of a beating heart rose in my ears. I couldn’t tell if it originated in my own chest or resonated somewhere else outside my body.

“Can you understand me?” I shouted at the girl over the increasing volume of heartbeats.

She tilted her head the other way before narrowing her eyes and baring sharp, needle-like teeth. “You!” she said, her voice a guttural hiss. Water gushed from her mouth as she spoke, bubbling down her chest, slapping the floor. Her hand lowered and pointed to the bodies around her.

The corpses began to rot. Shriveled flesh peeled away before my eyes, exposing bones and putrefied, oozing organs. A terrible, sour stench wafted through the air. Flies began to swarm, crawling over the human remains. Maggots writhed within bloodied orifices and decaying meat.

“You did this!” the little girl added, even more water spilling from her mouth.

Several thudding heartbeats passed as I stood in horror of her wicked accusation, my breath seizing in my throat. I gasped. “No! I didn’t do this!”

More movement within the pile of corpses drew my attention back down. Rats swarmed out of nowhere to gnaw on decomposing flesh. Their tiny, chisel-like teeth scraped and chewed through bones, ligaments, and fatty tissue. Their squeaks and shrieks only added to the roar of the beating heart and buzzing flies.

But the girl only looked at me, the same damning expression on her little face as she raised her hand and pointed at herself. “You did this!” Her wheezing voice gurgled, spewing water out along with the words.

My blood ran ice-cold as bile rose from my gut. With every heartbeat, fright tightened its grip on me. I shook my head at the girl. “No!” I cried. “I didn’t!”

She angrily pointed her finger at her own face. “You did this!”

Seeing it all play out again, no matter how many times I had in the past, was a terror beyond what I knew I could bear. “NO!” I screamed back.

But there was only one way to escape—straight ahead. There was never any going back. The little girl knew that and stood aside as I charged past. I tried avoiding the grisly mess of sprawling bodies, but there were too many. Bones snapped. Bloated organs burst under my clambering feet. A rat screeched as my foot came smashing down on it, and the number of corpses only seemed to have increased, littering the hallway as far as I could see.

I rushed forward in an awkward stumble while moving as quickly as I could. The beating heart drummed louder and faster against my eardrums. My foot hit the slick floor and slipped out from under me. I pitched forward, landing face down in the reeking carnage. Dark, slimy gore clung to my hands. I scrambled back up, horrified, trying to brush the repulsive filth off of me.

I sensed a nearby presence and turned with a start. The little girl stood behind me, watching, head tilted again as water poured down her face. I cringed away from her, holding up a hand. The heartbeat grew louder, faster. I longed to shut it all out but couldn’t fight the panic bearing down on me. I had no choice but to push onward, dodging, leaping, and staggering down the hall.

Then the lights flickered out.

I came to a stop in the complete blackness, my chest heaving with each burning breath. The beating heart slowed. A shiver trickled down my spine when a cold, wet hand took hold of mine. I forced down the lump in my throat as I held the small hand tightly. It came as a strange comfort in the darkness.

An icy calm came over me. My breathing steadied. The thudding heartbeat began to fade, replaced by an oddly soothing electronic chirp. The gently repeating tone came from somewhere in the blackness ahead. My thoughts cleared as I breathed deeply, in and out, matching pace with the beeping rhythm.

The lights flickered back on.

I found myself at the end of the hallway, the piles of corpses gone. A single door stood ajar before me, a slender, bright yellow shaft of light shining through to cast a radiant glow on the floor. I looked down at the little girl by my side. Her hair, skin, and nightgown were dry. She raised her head toward me, and I saw no more of the burning accusation—only sadness, maybe even pity. She gave my hand a weak, but reassuring squeeze.

Beside the door, a small sign hung on the wall. I took a step closer, trying to make out the words but couldn’t. The fuzzy letters only formed a jumbled mess of shapes, but it didn’t matter since I already knew what the sign said.

The little girl was silent, waiting patiently. I knew she expected me to enter the room, and I knew it was the only way out. Taking a deep breath, I went to the door with the girl’s small hand still grasped firmly in my own. I paused, leaning my forehead against the doorframe, dreading the sight of what was on the other side. I didn’t want to face it. Not again.

I gathered my courage and pushed the door open. The bright light from beyond bathed my face, blinding me. I moved onward, blinking and wincing until my eyes adjusted to the sunlight coming through the window in the small hospital room. Beyond the glass, a brilliant sun shone in a clear sky as it sank toward the distant horizon.

In front of the window, a hospital bed cradled its occupant, surrounded by machines and equipment. The patient lay with wires and tubes poking into his body, making him look like an old marionette. An IV bag hung from a metal stand, a familiar amber-colored liquid dripping slowly as his heart sucked it into his veins.

I approached the bed with the little girl in tow. I forced myself to look down at the man’s face—a face so terribly familiar. The nose and chin were a reflection of my own, only they had seen many more years.

He didn’t respond to my words.

I gazed out the window, my eyes welling with tears. The sun had begun to set, half of its sphere still above the horizon. I knew time was short.

The chirp continued at slow, regular intervals. The little girl was still beside me, still silent, still holding on. With my free hand, I reached down to take my father’s hand. His skin felt cold, his bones fragile beneath the sagging skin. I held on as long as I could, as the very last of the setting sun slipped from view.

My father opened his eyes and looked at me. I saw the faint but familiar glimmer in his weak expression. He gave my hand a gentle squeeze—his assurance that everything was going to be all right. His chest fell one last time before his eyes glazed over and closed. The electronic chirp sounded once again in a steady, unending tone.

“No,” I murmured. I let go of the girl’s hand and began to sob as I laid my head on my father’s chest.

I had seen it so many times, but it never failed to torment me. Tears streamed from my eyes as I shut them tight. Groans of anguish slipped through my gritted teeth, and my body shook as I choked on every breath. For many long moments, I held my father’s hand, my head on his chest, waiting for the pain to pass.

I didn’t know how long I cried, but when I finally looked up again, I found others had gathered around me.

The little girl was gone. In her place, my mother stood in tears, dressed all in black while other faceless women surrounded her, weeping and howling in grief.

“Mom,” I said, standing up straight.

She looked at me, an expression of terrible sadness carved on her face.

I reached out to her.

Without warning, my mother’s gaze hardened. She glared at me as anger twisted her face into a scowl. She raised a long, skeletal finger at me and screamed, “YOU DID THIS!”

The cruel, scornful words out of Mother’s mouth sent a sickening spasm of horror careening through my body. The room began to spin around me as my stomach roiled. I could taste the bile in the back of my mouth. I felt one last violent and painful thud deep inside my chest before my heart stopped dead.

I jolted straight up in bed and cried out, clutching my sweat-soaked bed sheets as my heart pounded against my ribcage.

For several terror-fueled moments, I sat gasping for air, unable to remember where I was. But realization finally crept its way in from some sleepy crevice in my brain as I looked around my bedroom, dark and quiet, and blew out a long, wheezing sigh.

No longer lost in the gruesome realm of my nightmares, my nerves loosened knot by knot until I looked down beside me to find the bed empty. My heart skipped several beats …

Buy the full book on AMAZON!