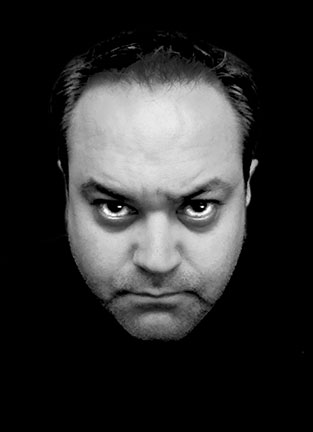 Despite the menacing photo, T.R. is actually a big softy. He was born in 1974, in Northern California, where he still lives with his wife and two children. He has spent the last 20 years in marketing and graphic design. He also dabbles in music, and as a songwriter, musician, and producer, he has released two complete studio albums over the last decade.

His love for writing sparked to life when he was very young. He wrote numerous short, silly stories that are now lost to the winds of time. As he grew older, he began writing more complex stories and as a sophomore in high school, began writing and completing a full-fledged sci-fi novel. That first novel will likely never see the light of day, but the universe it exists in is still very real to him, and he has considered revisiting it someday.

While real life became his top priority after high school—marriage, children, job, mortgage—he always found time to write. He wrote many short stories over the years in a number of his favorite genres, including suspense, sci-fi, and fantasy.

Fast-forward to one day in 2011 when T. R. and an old high school friend sat at a bar talking (and drinking). They had always loved to brainstorm, often sitting for hours just coming up with ideas for new universes to create. They were having one of these conversations when the wheels in T.R.’s head started turning. Not long after, he started writing what would be the first novel in his Maxwell Floyd crime fiction series. For some strange reason, the words flowed effortlessly and in less than six months, he had completed the rough draft. It soon expanded beyond the first book into a whole new world with new characters, new backstories and new ideas. T. R. has since written two sequel rough drafts, and has drafted outlines for many more.

It has been a long journey, but T.R. has loved every moment of it. After six years of development, he was ecstatic to finally release A Cold Blooded Rain: Book 1 from the Files of Maxwell Floyd on November 1, 2017 (Click HERE to view on Amazon).

The second book in the series, When Wolves Come Calling, was finally released in August of 2019 after numerous delays. T.R. is currently working on book three that he hopes to release in late 2020 or early 2021.

If you’d like to get a sneak peak of T.R. Leton’s universe, head on over to the BOOKS section on this website.