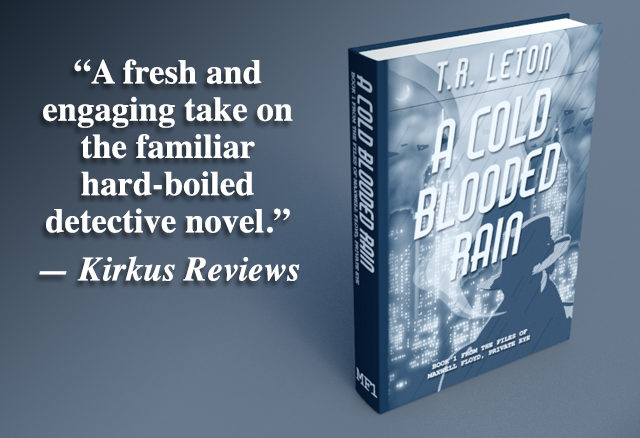 This just in from the folks at Kirkus Reviews:

In a noir-ish future, homicide cop Maxwell Floyd’s rule-breaking pursuit of a criminal ended in the accidental death of a 7-year-old girl. He started drinking (again) to cope with the guilt, but what seemed the solution to one problem eventually became the cause of other difficulties in his life. After losing his job and his wife, due to his increasingly frequent intoxication and resultant misconduct, Max was forced to try to make ends meet as a private investigator.He’s still struggling with his drinking habit, though, so this is easier said than done; he spends most of his time in Sam Duggin’s Fifth Street Bar, chatting with the attractive owner and bartender, Molly Mitchell. When Max is offered a case by one Mr. Fletcher from the police commissioner’s office—if he completes it to his employer’s satisfaction, he may earn his cop job back—he can’t say no. The crime at hand: the brutal murder of Claire Hemsley, the daughter of a wealthy industrialist. Max must solve the crime without stepping on the toes of the cops who are already working the case, and the PI is motivated and anxious to beat his competition. However, it soon becomes clear that Fletcher hasn’t been completely forthright about the details of the situation—and he may not have been honest about why he came to Max in the first place. As the private eye tracks down leads and closes in on a suspect, he even starts to wonder about his own sanity.

Leton’s fictional world is wonderfully distinctive. Although parts of it feel as if they’ve been lifted right out of Raymond Chandler’s work, as readers get deeper into the story, they realize that it takes place in a New York full of datapads, hovercraft, and handheld weapon scanners. The prose is tense and moody during the suspenseful scenes as well as during the action sequences: “As I ran toward the riverbank, two Air Patrol flyers came screaming in from the distance….Their wailing sirens and thunderous fan-jets provided only a brief satisfaction.” Max fits the hard-boiled detective template to a T, and yet the author somehow avoids making him into a boring stereotype. The PI is just messed up and unreliable enough to make his demons feel authentic, and not just set dressing. Readers will enjoy living inside the detective’s head as he makes his way through the city streets, and they’ll savor attempting to figure out the crime along with him. The novel hits all the familiar notes of the PI genre, plus a few more; its self-awareness and enthusiasm for its milieu are infectious and make the book even more enjoyable. This is only the first in an ongoing series of Max Floyd books, and readers will certainly be curious to see where Leton takes his gumshoe in the future.

A fresh and engaging take on the familiar hard-boiled detective novel.